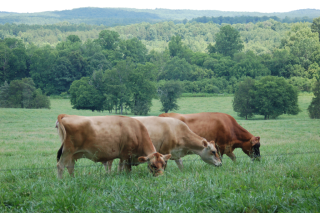 Uwharrie Farm, nestled in the rolling hills of the Piedmont region of North Carolina bordered by the Uwharrie River just west of the Uwharrie Mountains, has been home to many homesteading families since the time of the Civil War.  It was established as Uwharrie Farm in 1990 by Larry and Judy McPherson, current residents of the old farm house on the property which predates the Civil War.  In more recent years members of the Hammond, Bingham, Waynick and McPherson families have lived on the property, raising families and working the land.  The old farm house was remodeled around the 1930s or 1940s by C. C. Cranford, who owned a hosiery mill plus a number of other business interests in Asheboro, NC. 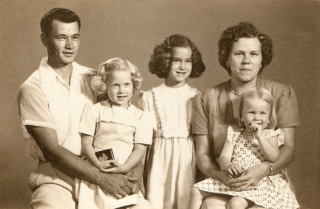 In 1953, when there was a trend for farm families to move to the suburbs, Judy's Dad and Mom, Walter and Elsie Waynick, had other ideas.  They wanted to move from the town of Asheboro to a farm.  They found the 200 acre farm down a two mile, narrow, lonely dirt road, (currently upgraded to a paved road), about 13 miles west of Asheboro.  They decided this was the place they wanted to live, work and raise their young family.

After the move Walter continued to work third shift at Bossong Hosiery Mill in Asheboro, NC, leaving Elsie and their three little girls, Iris, Pat and Judy, to spend nights alone on this new farm with no close neighbors, no phone and no car.  Elsie, in her senior years, commented "I felt like a pioneer woman and I was scared". 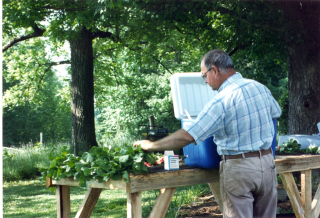 Later two more children were born into the family, Roger and Anna. The family worked together and played together, gleaning most of their food and much of their recreation from the farm.  Garden/field work, animal care and household chores were all shared by the family, as was common in that time period, while fishing and swimming in the Uwharrie River and hunting rabbits and squirrels provided additional food and recreation.  Aunts, uncles, and cousins often visited, enjoying farm meals, hunting and games such as tag, Rook, and softball.  The farm was the center of the families' life, teaching skills and a strong work ethic while providing abundant exercise, sunshine, fresh air, recreation and nutritious food.  In 1978 Walter died after suffering his fourth heart attack.  Elsie continued managing the farm until 1987 when she remarried and sold the farm to her daughter, Judy and her husband Larry McPherson. While browsing the garden book section of their local library one day in the 1980's  the McPhersons came across a book titled "The No Work Garden, by Ruth Stout".  Well sure, a no work garden sounded very good, so they checked out the book and took it home.  Of course "no work" was a bit of a stretch, but it was definitely less work and best of all it introduced Larry and Judy for the first time to organic gardening, a phrase commonly heard today but not so in the 1980s. Although the gardening method they had learned from their parents was not heavily dependent on chemicals,  a little insecticide and chemical fertilizer was used.  Judy had concerns when reading insecticide labels that her parents had used.  Phrases such as, don't inhale, don't get on skin, wash thoroughly after using, etc., sounded troubling but she didn't know there was another way until Ruth Stout explained the beauty of organic gardening, taking advantage of the benefits of mulch while using no chemicals.  Immediately Larry and Judy began their life long adventure into organic gardening. 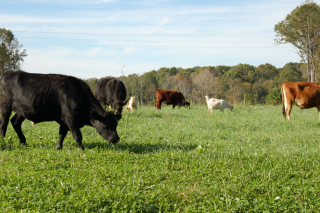 After purchasing the farm in 1987, Larry and Judy found ample room on the farm for their gardens.  In 1990 they established the farm as Uwharrie Farm, and proceeded to grow and sell a variety of organic vegetables and fruits along with flowers and baked goods at farmers markets, restaurants, and health food stores.  Their two children, Crissy and BJ, also shared in the daily activities of the farm.  The McPhersons also hosted farm apprentices, provided employment opportunities and supplied farm products for a 70 member Community Supported Agriculture group.  In the early years on the farm the McPhersons also raised sheep for meat and fiber.  After a few years, the sheep were sold in order to focus on fruits, vegetables and baked goods. 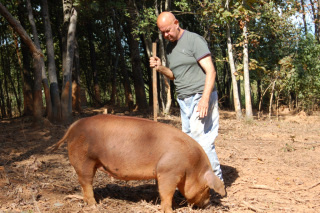 Change came to the farm in 2013 when Larry had heart surgery followed by a severe case of Myasthenia Gravis.  With a little time, he fully recovered from both but he and Judy were no longer able to keep up with the previous demands of the farm.  As they had already produced pasture raised beef for themselves and a few customers, they began to focus their efforts on this endeavor, eventually adding pastured chickens, pigs and goats.

Currently the McPhersons focus on humanely raising their animals, allowing them to express their natural characteristics while preserving the natural integrity of the land.