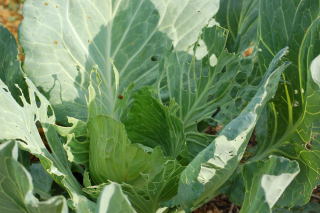 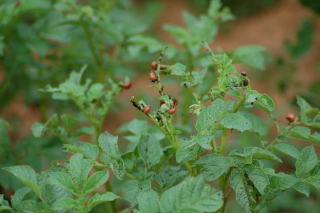 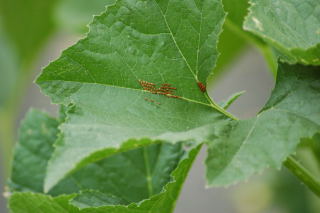 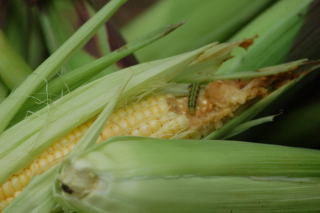 The goal in organic gardening and agriculture is to achieve a balance between the beneficial insects and pest insects rather than the destruction of all insects.  Healthy plants deter attacks by insect pests.  If an insect pest does nibble on a healthy plant it usually is of little consequence.  Healthy soil is the foundation of healthy plants.  Chemicals used in the soil and in the environment will decrease the population of beneficial microorganisms and beneficial insects.  Beneficial microorganisms in the soil help make nutrients available to plants thus contributing to healthy plants.  Beneficial insects prey on pest insects.
A chemical-free environment can be inviting to toads and lizards that feed upon insects.  Birds also play a role in decreasing the insect population as well as guineas, that are frequently kept on small farms for that purpose.  Also consider chickens, they not only provide us with meat and eggs, they delight in chasing down insects.
The above methods help us tremendously with insect pest, however there are occasions when we need to combat individual pest that have gotten out of control.  See the list below.

Aphids:  Even though there are organic sprays that kill aphids, spraying is time consuming and inefficient as it is impossible to get the spray on all the leaf surfaces.  I release aphidius, a parasitic wasp that hunts down and parasitizes aphids.  When infestations are heavy I also release lady bugs.

Planting plants at the time of year that is most advantageous to them is one means of combating insects.  For example, flea beetles love to devour eggplant in cooler weather, therefore eggplant should be planted after the cool spring weather has passed.  Worms are more plentiful in late summer, therefore tomatoes and corn planted as soon as the soil is warm enough typically have less worm damage.  Squash bugs are more abundant the second half of the summer so squash grown earlier in the season will normally have less damage from squash bugs .

Another defense is using varieties that are resistant to insect damage.  Example:  Vine borers love squash and pumpkins.  Unlike most pumpkins and squash that have a hollow main stem, butternut squash and neck pumpkins have a solid stem that does not allow vine borers to enter.

There are a few insect pest that I take direct action against.  They are as follows:

Cabbage Loopers can be controlled by spraying the plants with bacillus thuringiensis, a naturally occurring bacteria, which when ingested by a worm causes it to stop eating and it dies.

Corn Ear Worms are not usually a problem for me.  If they eat a small amount at the tip of the ear I just cut it off and there is plenty left.  However you can take action to prevent them by applying 4 or 5 drops of mineral oil on the silks 5 to 6 days after silks emerge.

Colorado Potato Beetles:  My potato plants are normally large and healthy.  A few potato beetles are not a problem.  If you wish to remove them they can easily be hand picked and dropped into a bucket of soapy water.

Squash Bugs can be hand picked and their eggs removed from leaves.  I choose to plant as early in the season as possible, harvest until the squash bugs overwhelm the plants and then move on to other vegetables.  Normally this method gives me more squash than I need.

These three books, with links below, give you much more information on controlling insect pests.